3 More Steps you Can Take to Prevent Plumbing Failure

A little while ago, we published a blog called 3 Steps You Can take to Protect Your Plumbing.

Today, we’re expanding that list to include a few other ways that contractors can protect themselves from mistakes and oversights that can lead to bigger problems down the road.

Without wasting any more time, here are 3 more ways you can protect your plumbing.

We recommend maintaining slack in PEX systems to accommodate for changing temperatures. Keeping 3-1/2” of slack for every 25’ run is a safe ratio in most circumstances. For this reason, it is important to ensure pipe can move within the supports.

It is far better to err on the side of caution when installing pipe, making sure it is long enough to allow for contraction. Keep in mind that if the temperature drops as little as 5.5°C (10°F), it can cause PEX piping to contract by as much as 1” in every 100’ of tubing. Cold water, or drops in the ambient temperature, will cause the piping to contract.

How do I properly leave enough slack?

Slack is provided by allowing some sagging between supports and snaking the PEX pipe around obstacles. Pipe strapping supports should be firm but loose enough to allow the PEX pipe to move as it expands and contracts. There are two additional methods to ensure you have enough slack to compensate for expansion and contraction of the PEX piping.

When possible, especially between floor joists, periodically wrap the tube in a complete circle (that is free-floating to provide space to contract). Do not install the loop so it is touching studs or joists on both sides. These loops will expand when the pipe is heated and contract when the pipe cools or the building is unheated. When bending coiled PEX pipe, against the coil direction, the bending radius must be twenty-four (24) times the outside diameter of the pipe.

When running the piping down the length of a joist or stud, cross over to the next joist / stud. Leave enough slack in the pipe to allow for expansion and or contraction before supporting the piping to the stud. 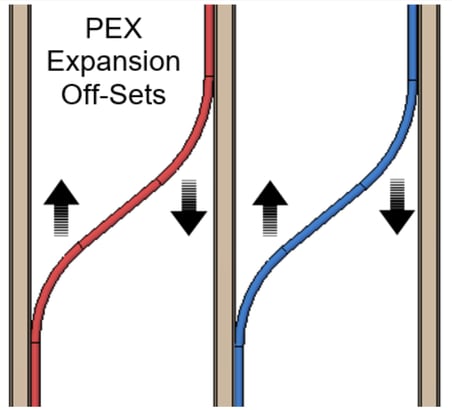 Water hammer is one of many enemies to a plumbing system. When a valve closes too quickly in a plumbing system, a shockwave is sent in the reverse direction back down the pipe, causing vibrations and putting immense stress on your plumbing system. Solenoid valves on appliances such as water softeners, washing machines and dishwashers for example are a common cause of water hammer due to the fast-closing action. Toilet valves are also known to cause water hammer.

Fortunately, there are solutions to minimize or eliminate water hammer noise.

Installing a water hammer arrestor at fixtures where noise is a problem is a great option to reduce disturbances. A water hammer arrestor installed as close as possible to the fixture will absorb the pressure surge and reduce the noise. It should be noted that even with an arrestor, PEX piping which is clamped or strapped insufficiently may still hit against something as it moves when the water flow is stopped. Water hammer arrestors are available with a wide range of connection types as well as an integral part of some water supply stops.

When transitioning to PEX piping, always solder sweat adapter fittings into place—allowing them to cool—before attaching PEX pipe. Heat damage to PEX may result if it is attached during the heating process.

As a rule, never expose PEX to direct flame or high temperatures. Proper installation procedures can help ensure the long life of the PEX plumbing system.

Download our eBook, How to Prevent Catastrophic Plumbing Failure for 6 other ways to protect your plumbing.

Hot or Cold: How to Protect your Home from the Elements

3 Steps You Can Take to Protect Your Plumbing